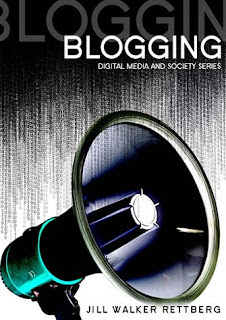 Jill Walker Rettberg is a trailblazer in matters of blogging; she blogged throughout her PhD process, wrote numerous papers and now her new book, Blogging, is out. Description from the publisher' s site:

Blogging has profoundly influenced not only the nature of the internet today, but also the nature of modern communication, despite being a genre invented less than a decade ago. This book-length study of a now everyday phenomenon provides a close look at blogging while placing it in a historical, theoretical and contemporary context. Scholars, students and bloggers will find a lively survey of blogging that contextualises blogs in terms of critical theory and the history of digital media. Authored by a scholar-blogger, the book is packed with examples that show how blogging and related genres are changing media and communication. It gives definitions and explains how blogs work, shows how blogs relate to the historical development of publishing and communication and looks at the ways blogs structure social networks and at how social networking sites like MySpace and Facebook incorporate blogging in their design. Specific kinds of blogs discussed include political blogs, citizen journalism, confessional blogs and commercial blogs.
Posted by Cathy at 11:54 a.m. 1 comment:

Friday morning, bright and early at the Darklight festival, I attended the symposium on privacy on the Internet, which started with a presentation by Daniel Solove. The presentation was entertaining and informative, and made legal matters sound interesting and simple, which I would say is no simple feast. As Daithi points out in his thorough report on the symposium, the presentation was drawn from the Solove's book The Future of Reputation, which can be read online free of charge (isn't that nice...) However, like Niall, I would have liked to have heard more about his new book on privacy.

On the whole, I noticed three strands of thought at the symposium, which I felt would have benefited from being treated separately. One was the concept of permanence of data and text on the Internet, linked also to new social practices, and maybe the emergence of a different conceptualisation of privacy by a new generation. A second strand was gossip, or non authorised information published by private people (bloggers/social network users) on other people or organizations; in this case, there were some suggestions as to a legal solution. The third strand, data mining, was introduced by Caroline Campbell and visibly touched a chord with the audience.

At the heart of the debate was the question raised by Solove of a change in the concept of privacy, and of the necessity for a definition of that concept, which is currently seen in binary terms, public as opposed to private, the home as opposed to the public space. Listening to Solove and some of his examples of possible loss of privacy, such as the digital picture of someone buying some item in a pharmacy, it struck me that this binary concept is very much a city concept. Life in a village implies a different expectations of privacy; you know the chemist, who knows your mother/father/neighbour. To some extent, this can be extended to life in Ireland, where the 6 levels of separation are naturally reduced. And this of course is also reflected in the metaphor of the global village and could be linked to ideas of tribal interaction suggested by Steve Boyd: "I maintain that we are returning to ways of interaction that are ancient, pre-industrial."

Moreover, this binary aspect is too simplistic, although the digital world seems to have inherited it to a certain extent. Social network sites in general only make a distinction between public and private profiles/pages/blogs. In this matter, LiveJournal has a very sophisticated approach to privacy issues, with the possibility of several privacy settings, from public to completely private, with various access to various posts possible for pre-set groupings of friends/acquaintances.

The discussion was lively and interesting, revolving mainly on the use of personal data by corporations , commercial entities, even governments, all represented by the ubiquitous "they". "They know what you are doing online"... the spectre of Big Brother was hovering, conjured by Amazon's recommendations and Google ads. While this aspect of privacy - or lack thereof - was both fascinating and slightly creepy, I would also have liked a discussion on "we are them", as suggested by a member of the audience. 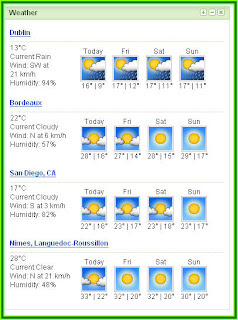 On my Google page, I keep track of my family, not unlike Mrs Weasley. I do not, however, measure the danger they are in - which should be minimal, what with them not being wizzards and fighting the Dark Lord and all that. I do not either own one of Microsoft's family tracker clocks. No, I track the weather in their adoptive cities. Why do I torture myself so?
Posted by Cathy at 10:58 a.m. 1 comment:

From Strange Maps, and originally from this blog, a very very strange map, even to those not familiar with North America. 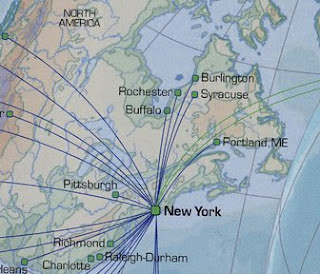 It comes from the inflight magazine on an Aer Lingus flight from the United States to Dublin. Lindsay Watt has comments on the geographical "inaccuracies", I just worry that if I fly Aer Lingus in America, I might not end up in the country I wanted... Portland seems to have moved North East of Quebec, and Rochester and Burlington have acquired a lot of empty land. A lot. Very empty. And if Aer Lingus fly to Canada, where do you end up? Greenland anyone?
Posted by Cathy at 10:09 a.m. 1 comment:

Followed from Ewan McIntosh's great blog, this link to a blog post about a flashmob in Belarus. I came across these flashmob events a while ago, and have seen some that were organized in Ireland and in France; the difference here is that the police seemed to be monitoring the online organization and arrested some of the people involved. For eating ice-cream?
Posted by Cathy at 9:46 a.m. No comments: