Love in time of social media

How Facebook and blogs are changing relations between boys and girls...

From the always excellent xkcd

Pirate day ahoy? How do pirates read, and how do they talk about their readings? It seems that LibraryThing knows a thing or two about them: 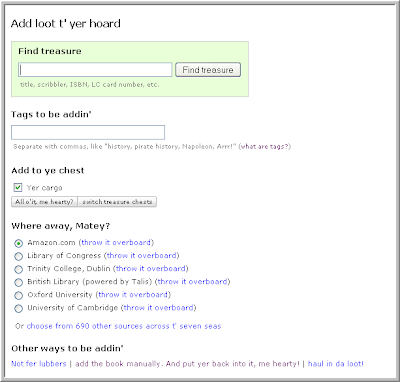 The Downfall remixes have been going for more than a year.  In 2008, Wired estimated that hundreds had been created. This week, a new remix was published in France, dealing with the incident of the racist comments from the Interior Minister, Brice Hortefeux.

The minister was attending a summer meeting in Seignosse, a small town in the Landes area. He was introduced to a young man from North African background, and is filmed saying: "Quand il y en a un ça va. C'est quand il y en a beaucoup qu'il y a des problèmes."  ("It's ok when there's only one; if there are many more, then you've got problems").  The video was published by the online edition of Le Monde, and it seems that many commentators criticized the unregulated internet,and the president of the UMP group, Jean François Cope, called for a public debate on "internet and freedom".  In the meantime, both the original video and now the downfall remix are gathering a growing audience...

Open Humanities Press has announced the launch of a new series of open access books, which will be available free of charge as electronic books and as reasonably priced paperbacks.  The series include Critical Climate Change, edited by Tom Cohen and Claire Colebrook, Global Conversations, edited by Ngũgĩ wa Thiong'o,  Liquid Books, edited by Clare Birchall and Gary Hall, New Metaphysics, edited by Graham Harman and Bruno Latour, and Unidentified Theoretical Objects, edited by Wlad Godzich.  From their press release:

NEW OPEN ACCESS MONOGRAPHS SERIES - Open Humanities Press (OHP), in conjunction with the University of Michigan Library’s Scholarly Publishing Office (SPO), is pleased to announce the following forthcoming open access series in critical and cultural theory: New Metaphysics (ed. Graham Harman and Bruno Latour), Critical Climate Change (ed. Tom Cohen and Claire Colebrook), Global Conversations (ed. Ngũgĩ wa Thiong’o), Unidentified Theoretical Objects (ed. Wlad Godzich), and Liquid Books (ed. Clare Birchall and Gary Hall).
In a unique collaboration, the scholars of the Open Humanities Press are partnering with the University of Michigan Library’s Scholarly Publishing Office to launch five new OA book series, edited by senior members of OHP’s editorial board. All of the books will be freely available in full-text, digital editions and as reasonably-priced paperbacks.
“This is a tremendously exciting development for humanities publishing” said Barbara Cohen, Director of HumaniTech and a Steering Group member of OHP. “For faculty and libraries to work directly together to address the monographs crisis in this way makes perfect sense. It is a savvy solution to a long-standing problem of access whose effects have been having a major impact on scholarship worldwide.”
“We are delighted the scholars of OHP approached us to support their innovative vision” said Maria Bonn, Director of SPO. “We are enthusiastically supportive of what they are trying to accomplish, and excited about the opportunities our collaboration offers for rethinking existing models of scholarly publishing.”
All books published by OHP in conjunction with SPO will go through the highest standards of editorial vetting and peer review that will be managed by OHP’s series editors and board, which contains some of the most well-respected names in literary criticism and cultural studies including Alain Badiou, Chair of Philosophy at the École Normale Supérieure, Donna Haraway, Professor of the History of Consciousness and Feminist Studies, UC Santa Cruz, Ngũgĩ wa Thiong’o, Director of the International Center for Writing and Translation, UC Irvine, Gayatri Spivak, Avalon Foundation Professor in the Humanities, Columbia University, Peter Suber, Open Access Project Director for Public Knowledge and Professor of Philosophy at Earlham College, and Stephen Greenblatt, Cogan University Professor of the Humanities, Harvard University.